Cabo San Lucas Weather: What to Expect in Paradise

You probably know that December is for whale watching, and that May and June is the quiet slice between spring and summer, but how’s the weather and the water? Should you bring your snorkel or your board? Should you bring a nice cashmere, or would it be too warm?

No more second guessing, no need for extras in your luggage “just to be safe.”
We have all your weather questions here, every month, every detail, in quick-to-scan nuggets.

Los Cabos has an arid climate. It’s hot. It’s 43% shrubland, 33% ocean and sea, and 24% forest. It gets humid, but the humidity doesn’t climb to uncomfortable levels.

Cabo San Lucas weather is great almost year round, but one of the best times to visit Cabo is from May to June. By these months the wintertime crowds have gone home and late summer/early fall storms have yet to hit.

July to September are surfing months, but can get quite humid with temperatures in the 90s.

Deal shoppers tip: These off-season months are great for hotel and spa deals!

October and November are also nice months for a vacation, but the milder temperatures turn it into a pre-peak season. Begin your hotel search early if you want to score great deals.

For whale-watching, plan to visit between December and March. If you’re after sport fishing, look to come in the late summer or fall.

Water temperature stays uniform from January to June. It warms up in July and gets steadily warmer until September. It begins to cool again in October to December.

Average water temps are warmer than in the US’s Pacific coast, but still cold for some.

Heavy wetsuits aren’t necessary, though it’s still more comfortable to put on a lightweight wetsuit. 3/2mm is ample. As you’ve probably read or been told by now, there are select swimmable beaches in Cabo. The rest are for surfers and boat charters for fishing and whale watching. 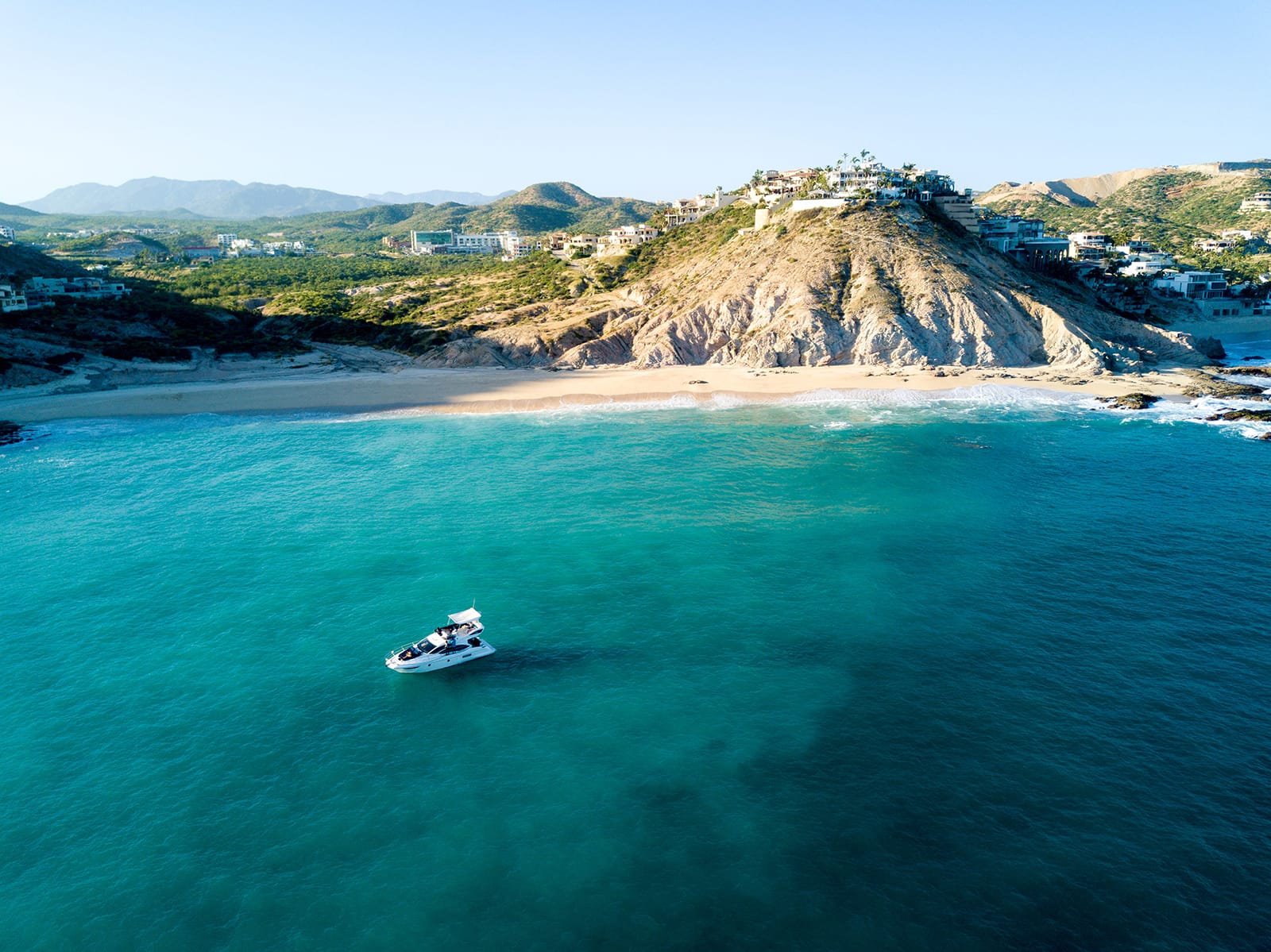 January’s high temperature is at a steady 78F. Rarely drops to 68F.

February and March in Cabo have temperatures that gradually get hotter.

Humidity varies from comfortable to humid, but never very humid. The beginning of the year is nice if you don’t mind the high-season crowd of winter escapees and spring breakers, it’s neither too dry nor too muggy. There’s often a gentle or moderate breeze blowing.

Likely not, and if it does, it would be a light rain. Possibility of precipitation for each day is a negligible 2%.

The water is flat, except for the Pacific Ocean, which has good swells for surfers.

April is still crowded with the spring breakers, but the day is getting hotter and longer as the summer approaches, the skies clearer. May is one of the shoulder months between spring and summer.

Mild humidity three days out of four, with dry days interspersed.
The southeasterlies and the northeasterlies clash over Cabo in spring. Calm to moderate windiness.

Nope. Not likely. April’s cloud cover is down to 22% and so is the chance of rain: the daily possibility is only 1%.

May sees even fewer clouds at 9% average cloud cover. Chance of rain is at 0.9%.

Surfing is at its peak in April and May, when the spring break crowds are trickling out and the winds push the water for consistent swells.

Like May, June is an in-between month, often called the best months to visit Cabo, with plenty of opportunities in paying less, and less of a crowd on the beach and in the water!

The skies remain mostly clear at 10% cloud cover, gradually getting “cloudier” at 26% cloud cover in the middle of the month. It’s humid and sticky. The southeast wind is too meek.

Nope. The probability is still at 2% daily, gradually increasing to 3.2% toward the end of the month.
The water

Don’t be fooled by the mugginess of the day– the water is still on the side of cold, but a favorite of surfers for the beachbreak and pointbreak swells. June marks the start of the year’s best surf season.

July sizzles at a steady temperature of 93.2F, with spikes to 98.6F one day in ten.
The heat owes itself in part to the cloud cover, now significantly increased to 51%.
It’s still muggy and sticky like June.

All this combined and the chance of rain is also higher at 8%. Unlike the previous months of the year, July sees moderate rain instead of light, with a 1% probability of a thunderstorm thrown in.

Water temperature climbs to a nice high 70s to low 80s. Test the water. If you need a springsuit, there are plenty of places you can get it from.

June, July and August are Southern Baja’s best surf season. Expect decent waves. If you’re not a strong swimmer, stay in the calm and swimmable beaches.

July’s temperature is constant — August starts hot and gradually cools down throughout the day, though only by less than a degree, from around 93.2F to 91.4F.

The sky is overcast at 24% of the time, with an average of 48-55% cloud cover, but humidity is more comfortable, more dry than humid.

The probability of rain is now at 15%. And if it rains, it’s most likely to be a moderate rain, with a 2% chance for thunderstorms. July to September sees the most rain of the year.

Cabo’s water temperature is at it’s warmest in August and September at 82-83F. August is the last of Southern Baja’s best surfing months (June, July, August). The waves would send a thrill to surfers’ hearts, but not to non- strong swimmers.

September is hot, hot, hot, with a daily, constant average of 91F, sometimes climbing to 96F, with low temperatures at 77F. The daily feel for the whole month is split evenly between warm and oh-god-we-need-air-conditioning. Look for spa deals inside the hotels, away from the heat.

September has mostly clear skies (48% partly cloudy) with the cloud cover decreasing throughout at the month.
Humidity is also a mainstay– the days are either muggy or very muggy.

On any given day, the probability of rain is now a constant 14%, with the chance for thunderstorms at 9%.

September’s water temperature is the warmest of the year at 83F and up. And if you’re going fishing, September has the most fish biting! See our Fishing Calendar!

October’s temperature doesn’t vary much from September, but the temperature gradually goes down throughout the day and month by degrees. It can start very hot at 93F and end at 89F.

The sky is also clearer. Cloud cover remains at mostly clear percentages (27-39%). The mugginess of August and September are over. October is mostly comfortable, neither going dry or very humid.

The start of the month has a 13% probability of raining, and it steadily goes down. The end of the month only has 5% probability. The first week of October sees the most moderate rain, with drizzles and light rain occurring 1-3% of the time.

The water is mostly still warm at an average of 81F, but test it for cooling temperatures before going in!

November temperatures fall throughout the month. The first week of November sees daily highs at 89F, and this goes down to 87F, 84F, to 82.4F in the last week of the month. Daily lows progress to cooler and cooler nights at 69F to 64.4F.

The sky remains mostly clear throughout the month, but it can get muggy in the middle weeks.

The likelihood of rain on any November day is low at 3%. When it does rain, it’s either a light shower or moderate rainfall, most of it happening in the first week of the month.

Water temperature has gone down to 79F. Average fair waves make it great for beginner surfers.

Temperatures in December go between the daily low and high of 59F to 82F. The sky is unbelievably clear for December, especially dazzling if you come from an overcast winter.

The daily feel is mostly dry, with some mildly humid days, but the whole month maintains a comfortable air, neither too dry or too muggy.

Likely not. The first week of December only has 1.8% probability of rain, and the last week has 2.5%. The middle weeks doesn’t fall below or rise above these percentages. When it does rain, it’s a light shower, most likely to happen around Christmas at December 22-24.

Want to receive more articles like this on various topics and the latest on Cabo San Lucas? Sign-up here!

This is not a list to send you product updates or bombard you with sales updates. These emails will just be updates about Cabo San Lucas and our thoughts on life here!